If you’ve taken note of European news today, you may have come across images of hundreds – thousands – of shoes arranged in neat rows across the Place de la République in Paris. A mind-boggling variety of footwear, and tastes, are evident: weathered trainers, leather boots, floral sneakers, glittery sandals, wellingtons, flip-flops, heels, mules. Even a pair of scuba diving flippers.

Why are they there? A large-scale march on climate change had been planned to take place in Paris on 29th November, preceding a climate change conference being held there from 30th November until 11th December. However, following the tragic events of November 13th, city authorities cancelled it.

In lieu of the march, protestors decided to make their stand another way: by sending their shoes. Roughly 10,000 shoes now line the Place de la République, as substitutes for their wearers and symbols of their support. This installation, which includes the footwear of Pope Francis, actress Marion Cotillard, fashion designer Vivienne Westwood, and UN Secretary General Ban Ki-moon – as well as thousands of other supports – clearly demonstrates the power of the shoe to act as representative, substitute, or symbol of its wearer. 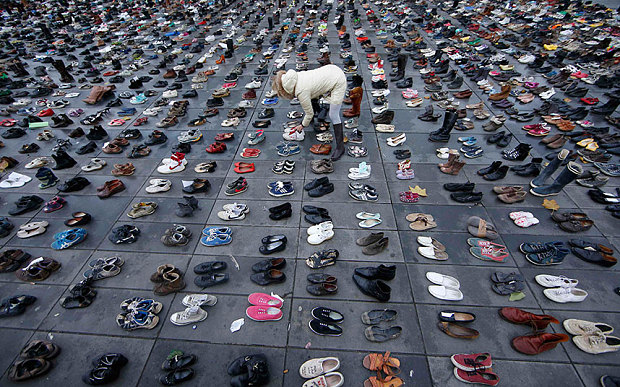 Anthropologist Carolyn White wrote in 2009 that ‘Shoes are compelling symbols of individual lives and act metaphorically to suggest an intimacy with the person who wore them’ (2009: 141). Shoes are seen as possessing metaphorical – indeed, metonymical – connections with their wearers and this theory has been used to explain the popularity of the concealed shoe as a possible apotropaic device. Shoes were concealed because they can act as substitutes for their wearers.

Indeed shoes are highly personal items. Archaeologist Carol van Driel-Murray believes that ‘As bearer of the individual’s imprint, the shoe functions as a signature – a spiritual graffito’ (1999: 136). But why the shoe, footwear-expert June Swann asks. Because it is ‘the only garment we wear which retains the shape, the personality, the essence of the wearer’ (1996: 56). By retaining the foot’s shape (and yes, its smell), the shoe becomes a metaphorical symbol of the wearer – a notion testified by the many mantras regarding footwear: Put yourself in my shoes. Walk a mile in another person’s shoes. The shoe’s on the other foot. You can’t put the same shoe on every foot. If the shoe fits wear it. And so on…

This link between shoe and wearer had two possible benefits: either it could fool any attacking preternatural power (spirits, demons, witches, etc.) into thinking that the shoe actually is the wearer, subsequently luring them away. Or the shoe is imbued with the wearer’s essence, agency and luck, making it a protective power in itself. Whether or not these theories are accurate, it’s clear that shoes were viewed as representative of their wearers – and still are today, if recent events in Paris are anything to go by.

One thought on “Selfhood and Shoes: Paris”